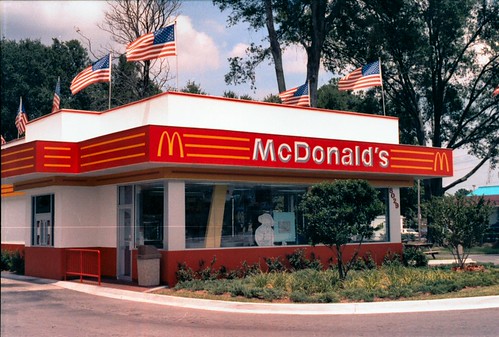 Admit it, you have eaten at a fast food restaurant in the last year or so. Were you proud of it? Probably not, however, when the kids are starving and you are driving right by, it happens.

The case that New York made for this law was two fold. The first was that people are fatter not skinnier. It is estimated that over 35% of adults are obese with related costs upwards of $147 billion. The second case was that the nutrition information  was not readily available and people were unaware.

Imagine peoples surprise when they saw the Big Mac was 550 calories and the 12oz milk shake was 530!!!

See there is the problem.  Everyone knows that the Big Mac is caloric dense…does everyone know that the milkshake is as bad?  Most I asked didn’t.

Like the Blueberry muffins from Starbucks…that will cost you 370 calories including 14 grams of fat with 6 of them being saturated. While we are at it, throw in 320mg of sodium a whopping 14% of the daily allowance, from one muffin!!!

Combine that muffin with a Grande Spice Pumpkin Latte and you now have a “meal” that has 750 calories 27 grams of fat with 14 grams of saturated fat. All from coffee and a muffin.

Last example…let’s say you are going to Wendys and you decide you will get a salad in order to eat “healthy”.  Have you ever looked into one of those salads?  How does an apple pecan grilled chicken salad sound…pretty healthy no?

Try this on for size…570 calories with 27 grams of fat including 8 grams of saturated fat.  Oh, by the way, don’t even think about not getting the grilled chicken…the fried chicken option adds 150 calories and 11.5 grams of fat!

Hopefully posting these calorie counts will help people make smarter decisions when it comes to these foods.

While it is very rare that I hear people say we need more government in their life, this is a perfect case where Government is doing a great job.