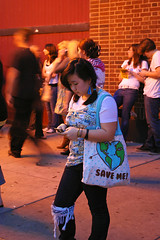 In today’s ever changing technological world, our lives must be getting simpler with all of the cool new gadgets that we own.  Did you realize that the average house owns 2.5 cell phones and 1.25 Ipods?  How about the new netbooks and the cool looking Ipads that Apple came out with.

While all of these products are uber-cool, there is one drawback…they are tiny.  I mean crazy small.  If you have a current smart phone your screen is about 3.5″ across.  Try watching a music video on that.  How about spending a half hour checking and responding to email on your netbook.  The screen is tiny, the keyboard is tiny and you have to spend a ton of time hunched over to use it.

The problem with these devices is how you have to use them.  Let’s say you have a typical teen that sends 50-60 texts per day.  Have you ever watched them actually do this.  They hold the phone pretty much in their lap and text away.  Pay particular attention to their head and shoulders…head looking down and shoulders slouched look familiar?

When you bend your head forward, the position necessary to look down at your phone, you are taking the curve out of your neck.  This curve is crucial.  Research has shown that reducing the curve in your neck can lead to a whole host of problems, the least of which are pain and tension in the shoulders and neck.

If you or your teen are spending a ton of time on the phone texting, please raise the phone up closer to shoulder level, allowing your head to be in a more neutral position, thus protecting that curve in your neck.

Mrs. X presented to the office with bilateral carpal tunnel.

Back to the patient.  Mrs. X reported no significant history of trauma.  She did report that she spent between 8 and 1o hours at the computer, with about half of that on a laptop.  When asked to reproduce her work position I noted there was significant leaning forward with a lot of slumping of the shoulders.

Examination showed significant restrictions in the neck and muscle spasm in the shoulders and forearms.  X-Ray exam showed a 7 degree curve in the neck, where 45 is ideal and 36mm of forward head carriage.

After going through my findings with Mrs. X I suggested a 5 visit trial where I would get to see how she responded to the care and she would determine if this course of care was for her.  Care consisted of neck and midback adjustments, extension traction and trigger point therapy.  After evaluating the wrists, I made the decision to not mobilize the wrists as I judged they were already moving well.

On the first visit I asked Mrs. X to rate the pain in the wrists, it came in at a 7.  I adjusted Mrs. X, had her stretch and worked on the muscle spasm in the forearms.  This went on for 5 visits.

At the beginning of the fifth visit, Mrs. X reported her wrist pain had improved to a 3!!!  As excited as she was about this, her objective changes were what was getting me fired up.  The muscle spasm in the forearms was significantly better, the restrictions in the neck were clearing up and I was even seeing a change in her posture.

This is a classic example of the pain being in one area but the problem located in another area.

If you would like to see a research report that shows chiropractic as effective as taking a bunch of pain killers for carpal tunnel click here.  Please remember, what we did with Mrs. X involved no drugs, which for sure saved some wear and tear on the liver, stomach, etc.