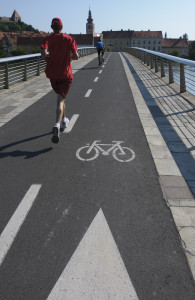 I am always asking my patients that are serious runners if they change their shoes out every six months or so.

It turns out I should be asking them a different question…are you rotating between two pairs of shoes all the time?

In a groundbreaking study, researchers in Luxembourg looked at a variety of different things with shoe usage being the most interesting.The study consisted of 264 adult recreational runners.

Of the 264 runners, 116 were classified as single-shoe wearers; runners in this group did 91% of their mileage in the same shoe, and ran in an average of 1.3 pairs of shoes during the study. The other 148 were classified as multiple-shoe wearers; runners in this group tended to have a main shoe, which they wore for an average of 58% of their mileage, but they rotated among an average of 3.6 pairs of shoes for their training during the study.

After processing the data, the researchers found the shoe rotating group had 39% less injuries. 39%!!! That’s huge!

The researchers wrote that this could well be because different shoes distribute the impact forces of running differently, thereby lessening the strain on any given tissue.

When I asked some of the runners that are shoe rotators why they thought this was, they consistently echoed what the researchers thought… midsole height and midsole firmness create differences in gait components such as stride length and ground reaction time.

As the researchers put it, “the concomitant use of different pairs of running shoes will provide alternation in the running pattern and vary external and active forces  on the lower legs during running activity. Whether the reduced [injury] risk can be ascribed to alternation of different shoe characteristics, such as midsole densities, structures or geometries cannot be determined from these results and warrants future research.”

Supporting this idea of reducing injury risk by varying tissue loads, the researchers also found that runners who reported more cross-training had a lower incidence of injury.

“Multiple shoe use and participation in other sporting activities are strategies leading to a variation of external and internal loads applied to the musculoskeletal system that could have a beneficial effect on [running injuries]. Although speculative, it could be that any training paradigm that limits excess repetitions will decrease the risk of [running injuries], especially overuse injuries,” the researchers wrote.

I will add in one more thought, however, this one is mine alone and not backed up by research yet. Wearing multiple pairs of shoes allows the shoes you are wearing a longer time to dry out. This makes for a lighter shoe.

No matter what the reasons are, if you are serious about running, get yourself multiple pairs of shoes and make sure that you are rotating them consistently!

Shameless plug time…the runners who keep up with their chiropractic care tell me they run faster, further and with greater ease. If you haven’t had your spine checked in a while, drop in and we will help keep you in top running shape.