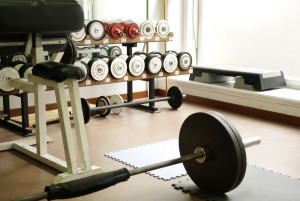 r when you were growing up and you went outside to play, relatively unsupervised (Gasp!)?

In the spring you played baseball, the summer you swam, the fall you’d play two hand touch/tackle football and in the winter you would skate when the ponds froze. There were no adults, refs or scoreboards. There was trash talking, competition, and most of all fun. I still remember fondly the touchdown catch I had on Kimball St. in Quincy to beat the kids from White St.

Let’s just say it is not like that anymore.

For the longest time, the thought was exercising before puberty would stunt growth by closing the growth plates earlier than they should. New research suggests that exercising at a young age, if done responsibly, is actually good for bone growth.

Now look, we are not talking about having kids bench press 200 pounds or squat 300 pounds.

We are talking about having kids exercise with body weight. If they do graduate to using weights, then the weight is kept low while the reps are high.

Now with all of this comes the one worry: Further specialization in sports at a younger and younger age.

Recently there was an excellent graphic that showed the breakdown of Ohio State’s football recruits. Of the 47 recruits 5 played only football in high school. 42 were multi-sport athletes!

Why am I writing about this?

Every day I am seeing more and more kids with spines and complaints similar to those of someone 20-30 years their superior. It is not unusual for kids to come and see me with back pain, neck pain, headaches, or various joint pains. Many of these kids are playing one sport sometimes up to 6 days per week for 40-50 weeks a year.

Each year 3.5 million kids under the age of 14 are treated for sports injuries with more than half being treated for overuse. The sad part is that the number of overuse injuries is on the rise, while the average age is on the decline. In the past 10 years there has been a 5 fold increase in shoulder and elbow injuries in youth softball and baseball players alone.

As a long time hockey coach, trust me when I tell you this. Early specialization almost never pans out. The amount of burnout that I see is staggering. Latest stats claim that 70% of kids by will quit sports by the time they are 13.

As a long time chiropractor, trust me when I tell you, early specialization will age your child’s body way before it’s time.